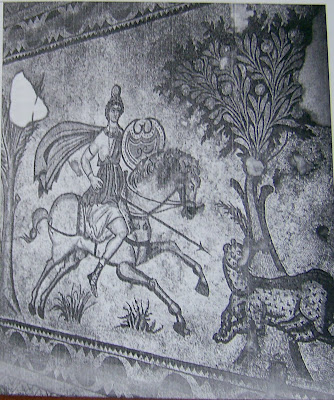 The second symbol accompanying the Star of David at Ein Yael is the crescent-shaped Pelta or Amazon Shield. Rather rare in the Land of Israel, its few known occurrences are on sarcophagi. One is to be found at Bir Yakub (Jacob's Well) at Sychar in the Nablus (Samaria) area (Pl. 11 ), the other one is the sarcophag of Ya’acov the Min in the village of Sakhnin (Lower Galilee) (Pl. 12). 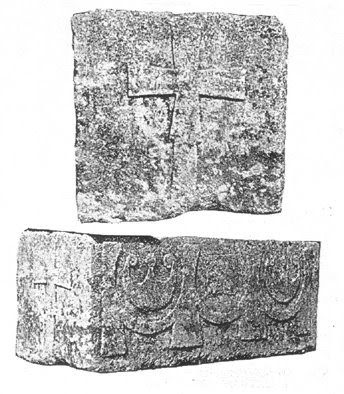 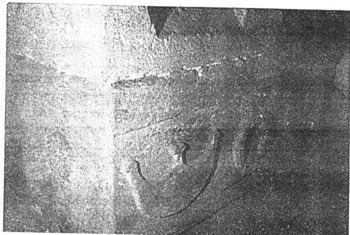 And a further two are at Nablus and Jerash (in Jordan) ; [10] The ornamentation on the long sides of the Samaria Sarcophagus from Bir Yakub [11] (dating apparently to the fourth century C.E.) features two large semicircular Amazon Shields framed by three continuous horseshoe-shaped arches. One of the short sides has a Greek cross atop a vertical post, clearly placing the sarcophagus in a Samaritan Neo-Christian context.

The Sakhnin sarcophagus is decorated in very similar fashion but lacks the elaborate frame and the Greek cross. It is certainly Neo-Christian for its inscription dedicates it to the “righteous Yakov the Min” , [12] ‘Min’ being the Hebrew epithet for the Neo-Christians [13]. The Jerash sarcophagus also has two Peltae on its long side while the second Nablus sarcophagus has, in the left-hand half of its long side, a group of four Peltae, one to each of the four points of the compass. [E.R. Goodenough, Jewish Symbols in the Greco-Roman Period, III, 226, ibid. 246]

In the right-hand half are, one above the other, what seem to be two corrupt Peltae. [14] .

I am convinced, however, that the Samaritan Neo-Christian congregations had adopted the Pelta symbol in place of the Judeo-Christian Star of David. The Samaritans, as we know, recognized the authority only of the Pentateuch, the five books of Moses, (and the book of Joshua of the conquest of the Holy land) and not of the other books of the biblical anthology. This made it impossible for them to accept a symbol associated with David (who does not figure in the first Five Books) and so they replaced it by the gentile Amazon Shield. In this very act we find evidence that the Star of David symbol was attached to the name of David as early as the beginning of the 2nd century C.E., something which most scholars have believed till now did not take place until the late Middle Ages. 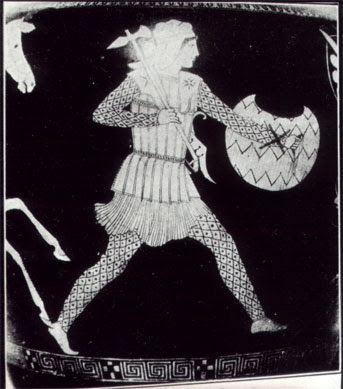 The Pelta symbol was not invented by the Samaritans but borrowed from ancient Greco-Roman art, in which it is very common. Its first known origins are Thracian, where as far back as the 6th century B.C.E. it occurs as the semicircular shield borne by Amazon warriors (Pl. 13). The Greek army then adopted it as a shield for light infantry, the peltestae, and it continued in use with the Roman army, at their auxiliary forces. 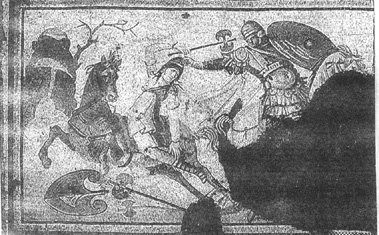 14. Antioch. Mosaic of Roman soldiers fighting Amazons. On the ground: a pelta shield with two double-headed axes. (On the left part of the Floor) From: D. Levi, Antioch Mosaic Pavements, 1947, House of the Amazons, Pl. CXXIII.

An outstanding example figures on the base of a bust of Emperor Commodus (180-193 C.E.) 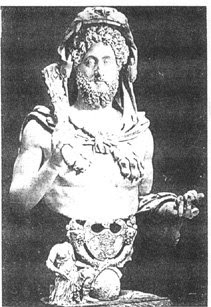 15. Apotheosing bust of Commodus (180-192 C.E.) as Hercules. Poised above a Pelta decorated by a Medusa head, set between two cornucopiae arising from a globe. To the left – a kneeling Fortuna (?). Palazzo del Conservatori, Rome. From: S. Strong, Roman Art, Penguin Books, 1976, PL. 150

The emperor is portrayed as Hercules, rising above the Pelta, the lion's skin on his head and the club resting on his shoulder, the Pelta itself decorated with a Medusa head framed by two cornucopiae. A goddess (Fortuna?) kneels beside the ornamental base. This apotheosizing portrayal demonstrates that in Roman art the Symbol had already been invested with distinct esoteric significance.

It was not the Samaritan people as a whole who made the Pelta their Symbol but the Samaritan Neo-Christian congregations. Samaritans converted to the new creed in great numbers, presumably in reaction to their inferior socio-political status [16]. The Roman Empire would not recognize them as a nation with its own national rights but only as a religious sect, a rejection which deprived the Samaritans of all civic rights, even that of giving testimony in court [17].To escape this demeaning position many of them enrolled in the Roman army as auxiliary forces and no doubt in that context had first hand experience of the Pelta, then still in use by the auxiliaries. Whether this was the source of their regard for the Pelta or perhaps it was their acquaintance with Roman religious symbolism, at all events they adopted it as their counterpart to the Judeo-Christians' Star of David, investing it with the same significance - both protective sign and symbol of a new faith.

The Ein Yael combination of Judeo-Christian, Jewish, and Samaritan Neo-Christian symbols is never found in the purely Jewish mosaic floors of Byzantine-period Synagogues. It is evidently a combination that only the new Judeo-Christian faith made possible, a faith that having renounced the ancient Jewish-Samaritan enmity, embraced the newly-converted Samaritans on the basis of social and religious equality.

So it comes that also at Capernaum, the Pelta symbol is present on the Frieze. It is attached there six times, to the external angles of a Shield of David facing inwards. This juxtaposition with the Davidic symbol cannot be coincidental. It must betoken a Samaritan presence, for which Jesus' acquaintance with and good opinion of them may be additional evidence [18] . The Samaritans seem to have settled at Capernaum after their conversion, for on the other Davidic Symbols at Capernaum their symbol does not yet appear.

6. The Ein Yael mithological Mosaic Floors of the Roman Villa

The whole Ein Yael complex has been dated by its excavators to the second century C.E., subsequent to the Bar Kokhba war. The villa, too, has distinguished Mosaic Floors in its triclinium (dining room) and in two side rooms. (Pl. 16). 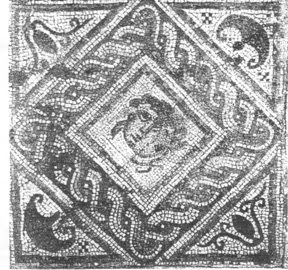 All the floors are composed of mythological scenes. The one in the triclinium has undersea scenes with swimming fishes interspersed with scenes of Nereids riding on Centaurs’ tails. Adjacent to the triclinium floor, to the south of it, is another rectangular floor, this one divided into three panels. The central panel again features swimming fish but is dominated by a head of Thetis, the sea-goddess. (Pl. 16). In each of the side panels is a square angled at 90 degrees (outlined by a two-strand Guilloche) framing a Medusa head. In the corners of these two panels, what do we find, but the same supplementary ornamentation as accompanies the Star of David, namely, two tripartite Shoshanim and two Peltae (Pl. 16). The elements common to both floors lead us to the conclusion that (a) both were designed by the same workshop and (b) that the owner of the villa was a convert to Christianity [19] (yet still much immersed in the Greek mythological tradition of his country). As numerous remains of pottery roof-tiles inscribed with the sign of the Tenth Legion were also found on the site, it seems highly probable that the owner of the villa and farm was one of the legion’s commanders [20] .

If so, we at Ein Yael are facing the astounding fact that the Magen David sign was introduced into the country by a foreigner, a Roman commander of the Tenth Legion and not, as it should be, by an autonomous, interior Jewish authority.

Yes, but our Italian military leader, founder of Ein Yael and builder of its mosaic floor with the symbol of the Magen David is (so to say) in good company: the Gospels in Matth.8:5-13; Luke 7:1-10 and Acts 10:1-48 are relating about two centurions of the Roman military forces of the country of high religious standard. The one, at Capernaum is declared in Luke 7:5 the builder of the Jewish Synagogue there (and this fact alone, a foreigner building a Synagogue, would have been enough for our sages not to mention this most beautiful Synagogue of the Galilee in their dealings), as mentioned by Loffredo (and others) in his book on the last excavations of the Synagogue [21] .

Christ had healed the servant of the centurion of Capernaum after his request, but the centurion did not see himself worthy to receive Christ under his roof (Matth 8:5-13). Christ received his devout faith with the highest esteem (Luke 7:9).

The other officer is Cornelius of Caesarea (Acts 10:1- 46), known to the Jewish public, then, by his ardent faith and his liberally giving alms to the poor constantly.

Cornelius had a vision, an angel was visiting him and telling him that God knows him and his good deeds and suggests him to call for Simon Peter, the apostle, who is in Jaffa at the tanner Simon, who’s house is at the sea. When they arrived at Cornelius house in Caesarea Peter found there a multitude of people. And while he was preaching about Christ’s lore the Holy Spirit descended and poured out on the circumcised (the Jews) as well on the gentiles. This was the first time that gentiles were seized by the new faith and converted, and this is the beginning of the extension of Christ’s Lore beyond the closed circle of the Jewish Christian congregations.

We are asking ourselves, how is it possible, that Roman soldiers, here in the country, are filled with such an ardent faith? And our answer is that they brought it already with them and had experienced the new faith already in Italy. This is confirmed now by Mosaic Floors in Pompeii and other Italian cities with the Star of David as their symbolic sign. Yet, these mosaic floors, at least in Pompeii, are belonging already to the 1st century C.E. as Pompeii was destroyed by the outbreak of Mount Vesuvius in 79 C.E.

Yet, what is not written in the story of the Gospels about these Roman officers is the question, wherefrom their ardent faith is coming, from which religion, or from which religious congregation. This strange omission of the Gospels can be explained, to my opinion, only in the following way: the Gospels were written in the first and second centuries C.E., i.e. in the time when the new faith had to be kept secret for fear of persecution by Jews and Roman authorities. In order not to endanger the officers in their ardent faith the writers of the Gospels saw it for fit not to remind the origin of their belief.