The Shoshan (LiIy) and Pelta (Amazon shield) as Complements to the Star of David, and their Significance

We shall see in the following that the Shoshan and the Pelta found at Ein Yael are the constant companions of David's shield (see p. 1). While the Star of David is a newly appointed emblem - of the newly-created Judeo-Christian religion - its two companion signs are traditional, the Shoshan, in its twofold formulations from Jewish religious art and the Pelta from Greco-Roman mythology. 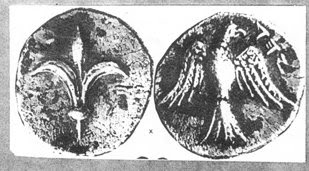 5. 'Yehud' coin. Half Obol: obverse: bird :(eagle), with outstretched wings + ‘Yehud’ above right. Reverse: three foil Lily. From the first rule of the country by Ptolemy I, 320-315 B.C.E. Bessin collection, Israel Museum, Jerusalem. From: Y. Meshorer, Jewish Coins of the Second Temple Period, Tel Aviv, 1967, pl. l,x.
I have shown in my paper, 'The Sign of the Lily, its Roots, Significance and History in Antiquity', that the Shoshan was the Symbol of the Torah [6]. It was derived from Aaron's Rod, placed by Moshe in the Ark of the Covenant, at God's command, in front of the Testimony (Eduth) in eternal remembrance (Num. 17:25). The Shoshan, the trifoil leaf of the Rod, became, pars pro toto, Aaron's distinguished sign (and of the High Priesthood altogether), worn by the priests at the front of their turban and called in the Bible ''the pure golden flower” (sis ha-zahav ha-tahor, Ex. 22:36-38; Ex. 39:30,31; Lev. 8:8,9. Inscribed on it were the words “Holy to the Lord'' (Ex. 28:36).
The “pure golden flower”, then, is the Shoshan's early designation, going back to the tribes’ wandering in the wilderness in the 13th century B.C.E.
In the Bible, the term ‘Shoshan' occurs for the first time in connection with the 10th-century Solomonic Temple - on the two free-standing pillars, Jachin and Bo’az (I Kings 7:21-22) and on the two engaged or supporting pillars at the Temple vestibule (I Kings 7:19). The two copper pillars, Jachin and Bo’az, were cast by Hiram, Solomon's Phoenician craftsman (I Kings 7:13-16), their capitals executed as “Shoshan work”' (I Kings 7:19, 22). The Shoshanim had to be full-size as seen from above, that is six-petalled, as the pillars stood free in front of the Temple, while the capitals of the two engaged pillars in the vestibule had to be tri-petalled, as seen from the side. In its six-petalled form, as well as in the tri-petalled side-view, the Lily came to be the paramount ornament of Jewish art and especially of Jerusalem’s ossuary decoration. Absorbed into the Judeo-Christian tradition, it became a constant companion to the David's Shield and, later, to the Cross.
In the First Temple's interior decoration the Shoshan was the most often used element, called “peturei sisim” i.e flower stems' (I Kings 6:18, 29, 32, 35) and it also figures prominently among the king's adornments. We learn from the description of King Joash's coronation (II Kings 11:12) that the “Eduth” was a feature of the ornamentation of the crown (nezer). Associating the crown with the Shoshan-Eduth lent the crown sanctity, as the Shoshan was a priestly appurtenance while the crown as such was a secular adornment possessing no religious meaning. [7]
In post-exilic times, the trifoil Lily appears on the very first minting of Jewish coins, the 'Yehud' coins of the late fourth century B.C.E. The issue, bearing the tri-petalled Shoshan emblem on its obverse, as we saw already, and the frontal eagle with outstretched wings on the reverse, dates to Ptolemy’s I first reign in the Land of Israel (320-315 B.C.E.) [8]
And this same obverse is now replicated on the modern Israeli state's New Shekel coin.
But, as the Shoshan, in its two versions, is an ancient Jewish symbol, it is no wonder that it was taken over by the Judeo-Christian movement. Yet, we are in a position to show the historical process, how this happened
The juxtaposition at Ein Yael of the Star of David with the tripartite and sixpartite versions of the Shoshan reveals that the new Judeo-Christian Creed is founded on the Bible, recalling Christ’s words in Matthew 5:17,18:
"Think not that I have to abolish the Law and the Prophets. I have not come to abolish them but to fulfill them. For truly, I say to you, till heaven and earth pass away, not an iota, not a dot, will pass from the Law until all is accomplished".
Yet the Star of David is a new creation of the Judeo Christian creed, which Christ did not know yet, as it was created only after his death and ressurection, becoming son and partner of God. 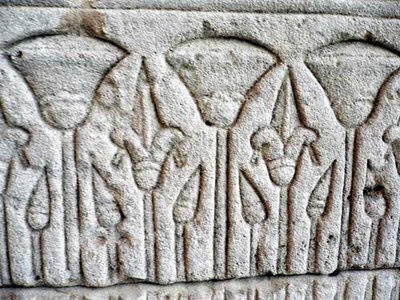 6. Three-foiled Shoshan - Symbol of Upper Egypt
and Papyrus - Symbol of Lower Egypt. From the 2nd millenium B.C.E
Picture from Wikipedia 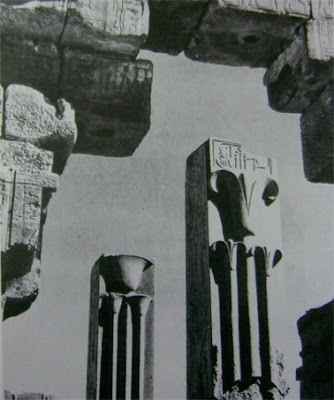 7. Thebes -two free standing pillars in front of the Temple of Amon, Kernak. Three-foiled Shoshan - Symbol of Upper Egypt and Papyrus - Symbol of Lower Egypt from the 2nd millenium B.C.E 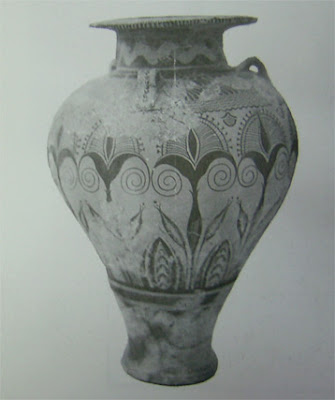 9. Three-foiled Shoshanim on ceramic vessle from Middle-Minoan Crete between 2000 and 1550 B.C.E